This post has been a bit delayed. Mainly because I have been painting and trying new things and every time I thought about writing a post I did the "after I finish this part" thing.

First, I painted the last of my frostgrave stuff, then I decided to do all the bases on all the stuff I painted recently. I tried the GW texture paint mourn mountain snow and see why many people are disappointed with it. I think it might be great for terrain were you can do small clumps of snow on ledges and stuff but for bases even if you really pile it on it still looks a bit weird. 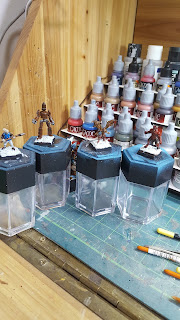 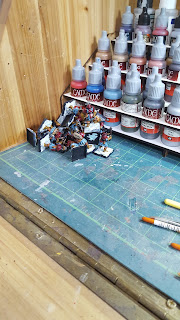 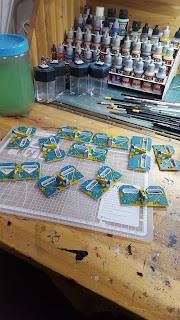 Then, while touching up the minis, I accidentally put way to much paint on the pallet. But it was the right color for finishing off this stuff so I broke it out. I am now somewhere around 75% done them. I mainly need to do the black and then clean up some mistakes and they will be done.

But that's not all. It's not really painting table but it is model related. I broke out my copy of MERCS Recon: assassination protocol and gave it a spin. Since it was my first game I was a bit confused during it but still had a lot of fun. I had printed off other factions boards so I could play my texico or ISS. I played the ISS. I know I made a lot of mistakes in terms of threat and I think I messed up the breach and clear I was doing. Unfortunately my oldest came in and scattered a bunch of the bits all over in a tantrum so I couldn't finish. But I will definitely be trying it again. I think I may paint up the other models for that soon as well.

More as I get it done.
Aruki