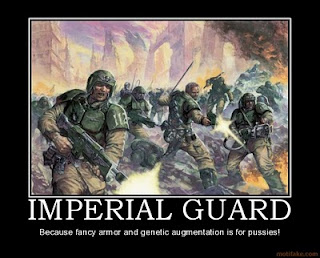 In 5th edition with the masses of tanks that can be taken my army is rather unusual because I don’t have a single one. No walkers either. In general I despise tanks, but especially so with my IG. I do admit however that I have thought of buying some of the super heavy tanks just so I have them for apocalypse and spearhead, never mind the models are nice. This is even true with my tau. If it wasn’t for my pathfinders being required to take devilfish my tau would not have a single vehicle in the list as well. I also tend to avoid taking the vet based lists that are so very common now. I take them when I need to, usually because of a lack of guardsmen to do another infantry platoon
For me a large reason of why I do a large full foot grunt guard army gets back to the image. Not only. The image we so often read about in GW and black library stuff. But in movies and old documentaries as well. The image I mean is the hordes of regular joe standing there in the face of overwhelming odds and fighting as hard as they can. In the trenches, the woods etc.
Recently I have even been working hard to build lists around the whole idea of a standard guardsmen squad. So plasma for instance isn’t very prominent. It’s guys with flamers or grenade launchers, and maybe just maybe they have a missile launcher or heavy bolter or something. When you do get things like plasma its in the command squads in the hands of a vet. Now with the guard few other armies can match there horde might. Lets for instance look for a minute at just a standard platoon. The composition of a standard platoon is : 1 platoon command squad, 2-5 infantry squads, 0-5 Heavy weapon squads, 0-2 special weapon squads and 0-1 conscript squads. 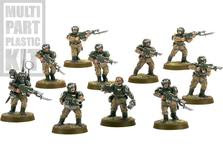 Now the bare minimum for this one troop choice is composed of a platoon command squad and two infantry squads. That’s 25 models at a cost of 130pts with no upgrades at all. Now what can you get with that you may ask. Well this is where they shine. Infantry squads are the only units that combine if they wish in the IG codex. So this means you can field your 1 troop choice as two ten man squads and command or a twenty man squad and command squad. But the joy does not stop there. Keep that command squad close and the commander can issue orders. Yeah, he’s only a platoon commander and its only one order but he has three very useful commands. First, he has first rank fire, second rank fire. This command is fantastic for laying out firepower with your lasguns. When successfully issued this order makes it so each guardsmen fires one additional shot. That’s 3 shots at less then 12” and 2 at more then that. Take are 20 man squad, that would be 36 to 54 shots (damn sergeant has no lasgun). Yeah I know what your saying to yourself, pfft there just lasguns, but when you got that many shoots odds are with you. Especially if you do this on a 50 man squad of grunts or even conscripts.
Next the commander has the incoming order, this has the ability to give the targeted unit +2 to there cover save. So hiding in some trees, we just went from are 4+ cover save to a 2+. Damn handy in my opinion. The last one is called move move move, in short you run. But instead of rolling 1d6 you roll 3d6 and pick the highest. Once again handy. 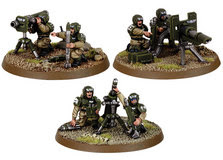 Now are brave little grunts have more options then almost anyone else when it comes to upgrades and point cost is altogether reasonable. These little guardsmen have 17 different choices. What’s that your little guys are running away to often, no problem give them a commissar. Need heavier fire power, piece of cake, they have everything from flamers to lascannons they can take. Keep failing orders give them and the command squad a vox caster. Need some power weapons to take out those nasty marines? Great you can have 2 when you have a commissar. Add this with Combined squads and it gets nasty. Never mind being able to take things like priests. You can if needed equip these poor souls to take on anything.
Now your asking if there so great why doesn’t everyone use them. Well that’s simple, there are a long list of reasons. First lets look at the there main competitor for troop slots, veterans. So one Infantry platoon is a min of 130pts. But they can take a max in total of 6 special weapons and 3 heavy weapons (between command, and 2 infantry squads). And with a bs of 3 and a 5+ save they die very easily. Where the veterans are only 10 men but they have a bs of 4 and a 5+ save. They cost 70pts with no upgrades. Yet they have 21 upgrade options. Which include 1 special weapon your infantry squads cant get (heavy flamer) and doctrines. Yeah the doctrines are expensive but there good. 30points gets you 1 of 3 choices, carapace, camo-cloaks and snare mines or melta bombs and a demolition charge. Plus if you have any other commanders they can give them orders and they can take 3 special weapons. 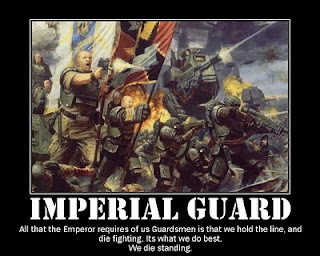 So when a prospective or even current IG player looks at the list they may go, OH cool look at everything I can take. But then they realize the real world cost of taking a standard platoon. That’s a min of 2 boxes of guardsmen plus a command box or another box of guards. Where for the same price you can have 3 troop choices. The other side is potential point cost never mind real world cost of a full infantry platoon. If you max out just on bodies with no upgrades 1 infantry platoon consists of about 12 boxes of guardsmen (117models needed) and 5 boxes of heavy weapons (15 heavy weapon teams needed) that’s about 280 pounds. Points wise those models cost 945pts. Or you can buy 1 box of guardsmen for 15 pounds. And they cost you 70points. Hence the reason for so few people using them even in large games. Given you don’t have to take max, and I will probably never take conscripts Just because of the cost of buying all the models.
But its nice to have the option. Usually I take a max of 3infantry squads, a few heavy weapon and 2 special weapon squads and do two or three troop slots that way. The only real problem I encounter with an all foot army. Is the time it takes to set up the models. Hence for apocalypse and stuff I’m seriously considering a few super heavies.
The man thing I love besides the look of all these little guys together taking everyone one on is the look on people’s faces when even at 1500points im fielding more than a 100 models. Many people just don’t know how to react to it in game which is amusing to watch. Anyway more on my normal army lists later.
Posted by aruki at 7:56 PM