Alright first lets look at what the spearhead rules do for tau. The main spearhead rule makes it so tau can move at cruising speed and shoot there main gun. Since the hammerhead only really has one weapon this is great. The only catch is they have to be within 4 inches of another model. The other benefit is of course they can hold objectives. The main drawback for tau is a very short list of units available. You basically have 4 choices.

Hammerhead gunship
Comes in at 90 points without anything. ion cannons are 15points and railguns are 50. For a a secondary system you can have two burst cannons at 10points, 2 gun drones at 20points or a smart missile system at 20points. At base cost you’re looking at 115points without any real upgrades. The main gun as ion is good for its 3 shots at 60inches and str 7 ap3. Its great for infantry and light mech but struggles with the heavier. With the railgun you get the best of both worlds. 72 inch range and either str10 ap1 or str6 ap4 large blast. but that adds another 35points to the cost. At max of 3 tanks for most formations that’s 450points with no upgrades. And some of the upgrades are well worth that but that will come latter. Also keep in mind that forge world has a bunch more weapon systems available.

Sky Ray Missile Defense Gunship
At 125 points this unit is in my opinion a waste of points in everything but apocalypse games. It has 6 seeker missiles, two networked mark lights, a turret mounted weapon system and a target lock. The target lock is nice because it can launch its own missiles at two different targets but there are only 6. And the seeker missiles are only str8 ap3, however they are unlimited range. These mainly shine in apocalypse games because of there anti air abilities and the support they lend to fire warriors and pathfinders for taking out light mech.

Devilfish
At 80points with a burst cannon and drones its a decent transport but wont work for most of the data sheets since its a transport.

Pirahanha light skimmer team
Honestly I love the model but would never use this in regular games, mainly because I find pathfinders more valuable. They come in at 60points each in squads of up to 5. They have a burst cannon and 2 gun drones. They can upgrade there burst cannon for 5 points to a fusion blaster. And take most of the mech upgrades.

Upgrades
All tau vehicles are also equipped with a landing gear. If the tank does not move it can choose to no longer count as a skimmer until it moves again.
The tau also have 9 vehicle upgrades available.
Blacksun Filter - doubles distance seen when night fight is in effect.
Decoy launchers - Whenever an immobilized result is rolled on the glancing table you can force a re-roll.
Disruption pod - weapons shooting from further then 12 inches count the vehicle as obscured.
Fletchette Discharger - any model assaulting the vehicle on a 4+ takes a wound with saves before they attack.
Multi-tracker - can move and fire like it is a fast vehicle (ie 2 weapons at cruising with spearhead rules)
Seeker missile - can take up to 2
Sensor spines - allows the vehicle to move through a terrain feature as if its normal terrain without the dangerous terrain effects and counts the vehicle as obscured.
Targeting array - Adds plus 1bs to the vehicle
Target lock - allows each weapon to fire at a different target

The targeting array and disruption pod are two of the most valuable and a steal at 10pts. 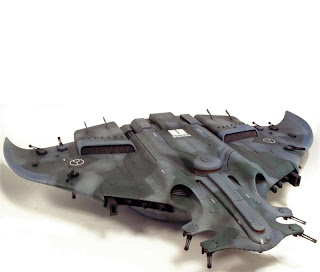 Now we move on to the formations. Out of the 12 formations the tau can utilize all but 2 maybe 3. The two we really can't use are Monstrous Spearhead (DUH) and Crusher Spearhead (we have nothing but skimmers). The one that is difficult to have is the Super-Heavy Spearhead. Honestly the only tau super heavy stuff I know is forge world and damn expensive (min of 65 pounds plus shipping max of 895 plus shipping). So for the regular player it’s normally just not worth buying them. We also struggle a bit due to a complete lack of walkers. Alright now let’s look at the formations we can use.
Due keep in mind that in most cases the only viable unit to take is a hammerhead.

Armoured Spearhead- 60+units
Up to 3 tank units, 5+inv save

This one could be pretty handy on a group of hammerheads but once again that’s 510pts with no upgrades.

Ambush Spearhead- 75+units
Up to 3 tanks, with no transport capacity. Stealth and infiltrate are gained.

My god this will be nasty on turn one with disruption pods and such as well but once again well over 500pts.

Mechanised Assault Spearhead- 80pts+units
Up to three vehicles with transport capacity with troops, they must be held in reserve and can then outflank onto the table.

Could be handy, but sort of limiting when only 3 units of either fire warriors or pathfinders.

Tank Hunter Spearhead- 60pts+units
Up to 3 tanks, gives them all the tank hunter skill (+1 on ap rolls)

This could well be one of the more useful ones to take with hammerheads since they will then pen just about all heavy tanks tanks (land raider is 14) on a pen roll of 4+ and glance on 3+.

Archeotech Spearhead- 30pts+units
Up to 3 tanks. adds +1 str (max 10) can backfire and kill or wound the model.

For are hammerheads with railguns this one is pointless and would just give you a higher chance of killing yourself. So I say pass.

Outrider Spearhead- 60pts+units
two or three tanks, one tank must be from a different entry to the other tanks ,makes it so another vehicle can take the hit for the leader.

Once again not much point unless you need more tanks on the board. Since you would have to take like a hammerhead and 2 devilfish or sky rays.

Skyfall Spearhead- 45pts+units
Up to 3 skimmer units, held in reserve, all gain deepstrike only first scatters, all shooting attacks made by them on the turn they arrive count as pinning and always resolved on a vehicles side armor.

This is a great one for tau. With hammerheads it’s an instant pain for the other player. With Pirahanas it would be even better. That would be up to 15 pirahanas. Though very pricey in points this has the ability with Fusion blasters to wipe out a very large group of tanks. At 65points each with fusion blaster and another Target array (+1bs), target lock (shoot at more then 1 target or a different one) and a disruption pod ( more then 12inch away counts as obscured), for a grand total of 80 points a model. At 15 models this is expensive 1245pts, but you have the possibility of annihilating 15 tanks in one go if positioned right.

With this one I personally think it would be a waste on fire warriors. However, on Kroot this would be deadly when combined with there infiltrate skill would make a crazy tank/hth kill squad for a messily 930pts. That’s 120kroot. But like I said depends on play style.

Seek and Destroy Spearhead- 50pts+units
up to 3 fast skimmers, one a game can move flat out but still shout like they moved at combat speed.

Only unit available is pirahanas for this but once again up to 15 of them with the same as the equipment as the skyfall spearhead could make this a very dangerous turn 1 or 2 for you opponent.

So overall this new expansion to 40k isn't the most fantastic thing for the tau but is manageable just very costly and points and cash for most tau players. However, as an add on to say my 1500point force for a 2000+point game its not to bad of an idea. Get some pirahanas or Hammerheads for harassing the enemy well the rest move up would work well. Otherwise I think I will pass in general on using my tau in this just on the basis of pure cost of buying new models to use with it.

Next time who knows but more to come maybe IG next.
Posted by aruki at 5:13 PM