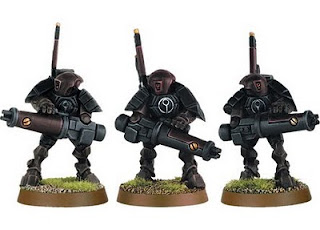 There are 7 suit kits made by gw. The above is the old xv15 stealth suit. The new xv25 is below. Stats wise there is no difference. But I still think the old ones look better, they just look more stealthy. The big thing for the stealth suits is the stealth field generator. They come with a burst cannon, have a 3+save and can take 1 battlesuit support system with the Shas’vre being able to take up to 100 points of battlesuit wargear. For a small amount of points (2pts) you can switch 1 suit to a fusion blaster for every 3 models in the squad. They also have infiltrate. 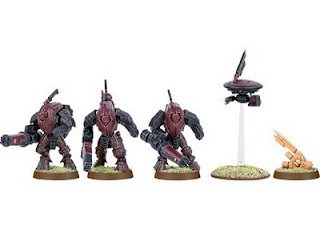 Then you have Crisis suits, gw does two different main kits, the commander is one and just comes with some extra guns and heads, then you have the normal kit. They must pick 3 weapon and support systems in total. Commanders and Shas’vre can also pick up to 100points of wargear. The crisis and the stealth suits can also move in there assault phase since they are jump infantry (jet pack). 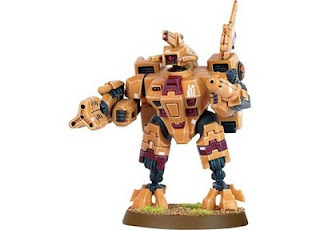 Broadsides must pick one support system. The Shas’vre ,as usual, can also pick wargear. 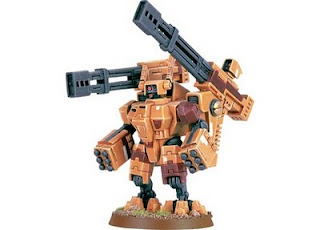 The last 2 suits are worn by special characters. The first is worn by commander shadowsun and is unique to her and you of course can’t change any of her equipment.
The last one is worn by commander farshight with the same restrictions. All suits also grant the wearer the Acute Senses and Deep Strike special rules. 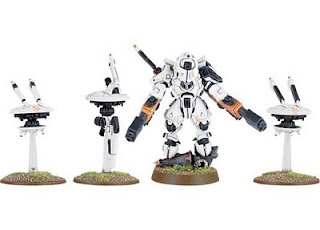 The Weapon Systems usually have two point costs. This is because if you take two of the same it is generally cheaper, however two of the same also means they are twin linked and thus its only really one weapon. The weapon systems are as follows.

The support systems are gear built onto the outside of the suit usually improves the character.
Advanced stabilization system -
Gives the model the Slow and Purposeful special rule, if 1 member takes they all must.
Blacksun filter -
Doubles the distance rolled for determining distance able to see in night fight
Command and control node (special issue) -
This piece is defunct in 5th edition, it allows players within 12” to use the bearers leadership for target priority tests
Drone controller -
Bearer most take 1 drone but can take 2 max, gun, marker or shield.
Multi-tracker -
Allows the bearer to fire two weapon systems
Positional relay (special issue) -
As long is bearer is on the table at the beginning of turn it allows a unit to deploy from reserve on a 2+, only works from second turn on.
Shield generator -
Gives the bearer a 4+ invulnerable save
Target lock -
In 5th edition it allows the bearer to fire on a separate squad from the one his unit is shooting at.
Targeting array -
Gives +1 to BS up to 5
Vectored retro-thrusters (special issue) -
Gives the Bearer the Hit and Run special rule. Can only be used on single model units.

The wargear section includes some of the support systems as Hard-wired and other different ones. These systems are described as being implants or pieces of jewelry worn by the models.
Bonding Knife -
Always allows unit to regroup as long as bearer is alive
Ejection System (special issue) -
Allows the pilot to eject (DUH) when his last wound is taken, is replaced with a model with -2str -1T who also has 1w and no save. Has a pulse pistol only. Only allowed for single model units or characters.
Failsafe detonator (special issue) -
If squad is forced to fall back from an assault this model stays behind and blows up. Large blast template, all models hit take a single str8 hit ap-. The enemy squad is not allowed to make a sweeping advance or consolidate. No moral check is needed for models killed either.
Gun drone -
Has a 4+save, twin-linked pulse carbine. Counts as same type of unit as bearer as well
Iridium armour (special issue)-
Gives the model a 2+save but the 6” move in the assault phase is reduced to a d6”.
Hard-wired blacksun filter -
Same as blacksun filter
Hard-wired drone controller -
Same as drone controller
Hard-wired multi-tracker -
Same as multi-tracker
Hard-wired target lock -
Same as target lock
Marker drone -
Has 4+save, a networked marklight (bearers unit can use marklight markers) and targeting array, shares bearers unit type.
Shield drone -
Same save as bearers unit and has a 4+invulnerable save. Same unit type as bearer.
Stimulant injector (special issue) -
Gives the bearer the Feel No Pain Special rule 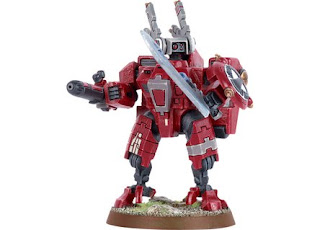 Overall, my weapons and wargear change according to the points. With my commander I tend to take a cyclonic ion blaster, a plasma rifle, shield generator, hard-wired multi-tracker, hard-wired drone controller, 2 gun drones, and a bonding knife. With the crisis body guard I usually do a plasma rifle, a missile pod, targeting array, hard-wired drone controller, 2gun drones, and a hard-wired multi-tracker. For the stealth teams I take most commonly a targeting array though sometimes a shield generator, and the Shas’vre takes a bonding knife, Hard-wired drone controller and 2 drones as well. With broadsides I almost always take a drone controller for each with shield drones, though occasionally I take multi-trackers instead. This makes the broadsides a pain in the ass to kill and then the Shas’vre takes a Hard-wired multi-tracker and bonding knife as well. This is a large part of the reason I feel two man broadside teams are more effective then 3 man.
I don’t usually take crisis teams but if I did they would probably have a similar lay out to the body guard.
Overall, the most important piece of gear hands down is the bonding knife, it costs very little in points and makes the squads last much longer. After that I would say a drone controller and drones for the same reason. As for weapons the plasma rifle is my weapon of choice mainly due to the large number of 3+ saves out there. The missile pod is usually my second choice because of its overall strong use against all but the heaviest of units and its excellent range. I tend to avoid the position relay because if something is going to deep strike I just use my pathfinders devilfish for it. The airburst fragmentation system is interesting but is only really useful against some tyranids and guardsmen usually. This is once again mainly just because of the prevalence of mech armies and marines.
This post is mainly supposed to focus on wargear options I will focus more on the suits in future posts. Well that’s all for now IG is definitely next to much about the tau on here.
Posted by aruki at 7:37 PM