I must admit I am a huge fan of FA and 2.0 is going to be interesting. I will hold off on any claims or major comments until I have a copy of the book in my grimy little hands. The eye candy is nice though.
The part that has me most excited are the new patrol boxes. Though the new starter set is also very tempting. The major thing that will make or break them for me is price. I am hoping they will be around the same cost as all the recent DW releases. (edit: alas they are not they are only a couple pounds cheaper than the current starters) Thus them being more of a supplement to the already existing starters and not just a new starter. 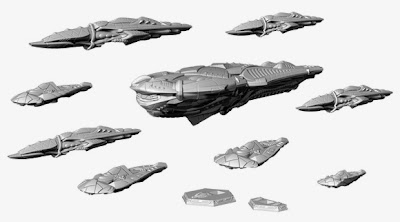 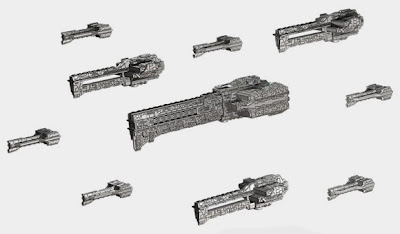 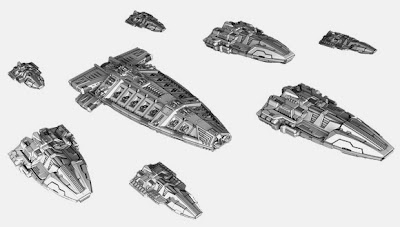 Above are for the 3 factions I have at the moment. Here are my initial thoughts based off of the photos. First the Aqua not bad but a lot more of basicly the same. Though that new battleship sculpt seems too fat compared to all my other models. The dindrenzi just hit me as more of the same, no real changes except more detail on the hulls. The Terran I like the changes it makes the ships seem a bit more stream lined. The new bomber and fighter tokens will be interesting depending on how the new rules handle them. By far my favorite thing about the new boxes is the extra pieces so you can make one into a heavy cruiser. I am very interested in how this will work exactly. For example, if for the dindrenzi this just means taking the stock body and adding different engines and guns I am psyched. Cause this means with the purchase of an extra hull you could easily have another cruiser. But if its the bits for the normal cruiser plus x extra bits i would be a little disappointed.
With the new starter I will probably get one since it will nicely supplement two of my existing forces. (edit: this will be costing 80 pounds, have 15 ships the rule book and some other doodads, little disappointed to be honest but it is not that bad of a deal. How ever, when compared to something like the DZC starter this is very very disappointing) But as with the patrol boxes price and such are major considerations.