It was a good/bad week. Let's start with the bad. I tried to paint my PHR immortals and it turned out horrible. So bad I actually debated tossing the models and buying new ones.

Now the good. I finished off my second mercs faction, the ISS. All seven of them. They were rather straightforward to paint and I like how the sort of weathering/damage I tried to do turned out. Once I figure out bases both factions should look great. This week I also assembled all the PHR and Shaltari stuff I have. This of course included magnetizing a large amount of stuff. The Shaltari were the hardest part because it turned out the casts I bought who knows how long ago were crap. 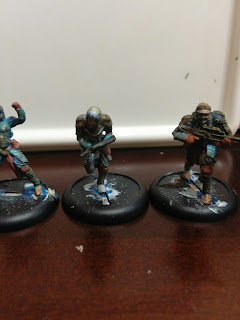 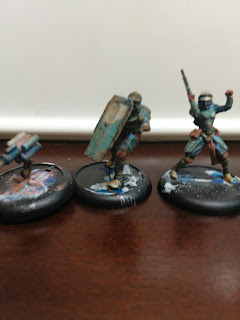 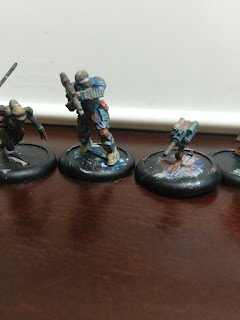 Hope you enjoyed the stuff. That is 7 more models and 14 more points. I also finally spent a joker when Spartan Games did the sale last week. Picked myself up the dreadnought group for my dindrenzi which finishes off the I need to have stuff for them. So the joker I would have gained is null.
More as I get it done.
Aruki
Posted by aruki at 9:47 PM