Another week and more of a dent put in the mountain. First up this week is the DE BFG fleet I painted up. Honestly the picture doesn't show how shiny the silver is under the purple ink/paint. I then also did most of the warzone Baharaus guys. There are still a few stragglers which will be painted after I prime them. 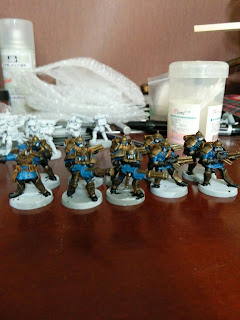 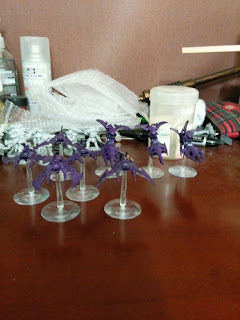 Which should hopefully be this next week. The main problem will be that it is a major holiday here in South Korea, and since I married a South Korean I will be quiet busy during it. The plan after that is to do my warzone imperals, followed by my stragglers for my two FSA fleets. I know that many people are planing zombie themed or such projects next month but I have no projects for that in the works at the moment. I am going to focus on everything I have going and try to finish as much as possible by the end of the year. More on that next week. Other than scoring for this lot that is it. So that is 18 more models and 36 more points.
Aruki