I didn't have the chance to post this yesterday so here it is today.

First up I finished off the dread and 3 other ships for my dindrenzi. So that's 4 more models and my dindrenzi done for now. I would like a few more frigates and cruisers in the long run but have no plans for picking them up at the moment. 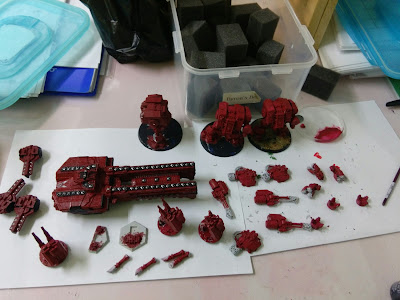 On top of that between last week and this I magnetized the dreads, assembled and based/primed them. Along with my two magnetized razorback turrets and 1 heavy bolter turret. So the plan is to crank away at them the rest of the month. The 3 dreads will form a troop choice as a siege dread talon for my Space Marine Siege army list. So I am looking forward to getting them done since all my undead stuff are far from being ready to do anything with. The only other thing to finish off are the two tokens that came with the dread which I should be able to polish off in no time.

More as I get it done.
Aruki