My airbrush setup and review of the items I use

Let us get started with the airbrush itself. I use a badger 360 universal. Overall, it works ok but I have a few issues. 1 of them is most likely just because I am not very good with it yet. The main problem I have is airflow. When I depress the trigger even a little bit with a low psi it always seems to be to strong for detailed work. This is believe is at least partly my fault. The only other comment I have on this airbrush is in my opinion the siphon feature is useless. I tried it once and it made a mess when I finished using the color and didn't allow for me to make a quick change of colour. The straws also need a rather large amount of paint in the pot in order to actually syphon. At the moment you can pick these up rather cheap online from amazon or ebay.

Next up is my airbrush booth.  I use a Stylex SSB-2. Overall it works great and provides great lighting when painting. It also folds up rather small for storage. It is also very quiet. The only down side is you have to take the light off in order to fold it up. If you are in South Korea it is a great option. Outside of South Korea though it is rather expensive to get, mainly due to shipping costs. However, I have seen many similar items sold overseas. If your interested you can find them on ebay. 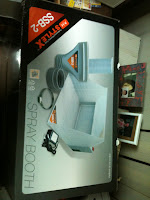 Last up is my air compressor also by Style X, the Gfrog01. This thing is great. It is very quiet, I often use it at 1 or 2am and have never received a noise complaint from my neighbors. It has a moisture trap and a psi regulator included along with two airbrush holders. However, I have found it dances a rather lot. So be careful where you put it. Once again, the major downside is getting it outside of South Korea is expensive due to shipping costs. This I have never seen for sale outside of South Korea but I am sure there are local equivalents that you can get for a reasonable price. 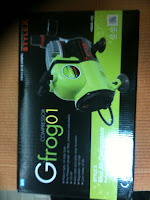 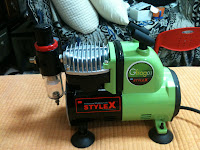 That being said  Painting updates over next few days and maybe another review.