The first book I looked at after Napoleonic Armies: A wargamer's Campaign Directory 1805-1815 was Osprey's Blucher's Army 1813-1815 from the Men at arms series. 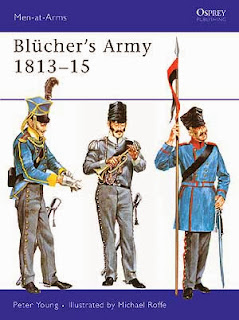 Now even though this book focuses on 1813-1815 it includes a lot of background info thoughtout the book which is excellent for helping new people understand what happened up to that point. The book also covers the history of not only Blucher but others as well. The greatest resource in my opinion though games at the end of the book in the notes section. They give a great list of books that was used as references which gives you a nice place to start from for further reading.

Now in point notes here are some of the usefull things in the book:
-background info on 4 other major influences during that period
-explanations of how things were different under blucher for
-staff
-cavalry
-infantry
-artillery+pioneers
- page 24 has a great chart for the lance pennons for the ulhans and landwehr cavalry
-other points of interest are
-the wounded (how they were dealt with)
-music
-honours and awards
- there is also a great explanation of the order of battle for June 15 1815
-The plates, no Osprey book is complete without these and there are a good number of units covered in here
-staff
-hussars
-dragoons
-uhlang and staff
- line infantry
-landwehr cavalry
-landwehr infantry
- artillery