This is the final painting table before the start of the 6MMRPC. First off I plan on continuing work on the two last earthshakers and maybe also working on some pathfinders and  firewarriors. Here is a pick of those firewarrios and pathfinders with the primer and base coat done also did a bit of orange detail work on 1 guy. No pictures of the earth shakers until the next tutorial post which should be in the next week or so depending on kids and work. Also sorry the pick is so bad couldn't get a good one to save my life today. 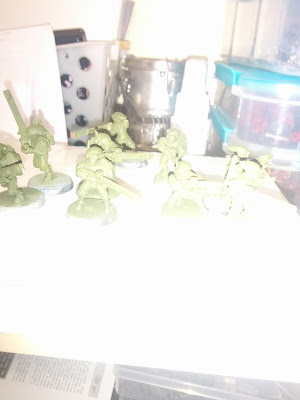 For jokers I have decided to do it by project. So the rest of the tau would be one. Same with my marines if I get to them. The rest of the bfg tau will be one, the rest of the aqua prime ships will also be one. Each merc squad will be one along with each of the infinity factions. All the dystopian wars would also count as one. That is like 9 more possible jokers. I may have more in the future but honestly I have no idea what I will do with the jokers in the first  place.

Maybe at the end of the 6 months I will reward myself x amount for each joker I have. This maybe a nice way  since I also blew the last of my budget on the infinity starter. There are still other starters I may want in the future mainly dropzone commander, Planet fall and dystopian legions. But I still haven't decided. Then again I also have my b-day and anniversary happening before the end of the challenge.

Bits wise the only thing I think I need to get is some more helion boards to convert into frigates and maybe a few more jetbikes for conversion into cruisers but that can wait.