First let us start with what GW has done to the blogosphere in the last 24hrs. I have seen many arguments about whether they did something wrong or not or whether they are treating the fanbase as crap again. Honestly, I am not sure, I started playing back in 1996. And at that time I enjoyed GW and there support for the community was much better. But since then I have come to despise many of their business practices. Which has made me invest in other companies. You will note I still have 2  40k armies. But I buy bare minimum and never by WD magazine. Gw has in my opinion been a bully too long. So I buy minimally to keep my armies up to date and by second hand when possible. They bully their fanbase, independent retailers and their past employees (look up stuff relating to the now defunct GW historicals).

EDIT: also BOOOO gw is in the process of dropping all their specialist games. I have always wanted BFG and Epic is what got me into 40k in the first place.

Ok now on to the good stuff. On sunday night I put together a new paint stand for my desk out of foam core. Took no time at all and was dirt cheap to make (less than a dollar). Still even has some extra space. 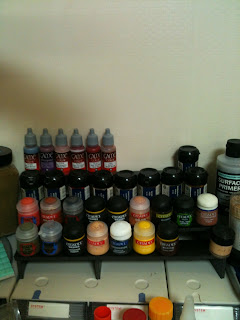 I also assembled and put the omni stand parts on all my dindrenzi ships last night. Tonight I will hopefully get them started. I plan on painting them as much as possible with my airbrush. So should only need to do details with a brush. 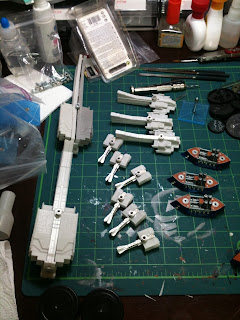 Then we have my DW ships. I have completed all the metal parts. Though I still need to figure out the engines on the sides. I have also started doing all the detail. 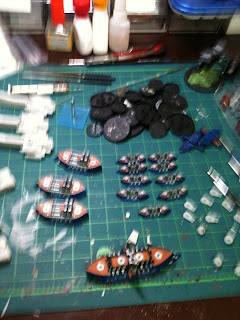 Completed most of the detail on this bad boy. He still needs touch up and to be inked but then he will be done. The detailing on him took me forever (about and hour and a half). 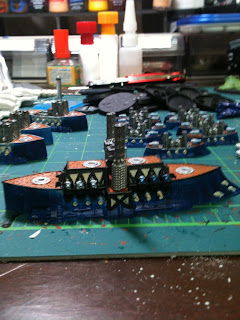 So as you can see some FSA is next up along with maybe a tau or two. On the sides I have also been doing foam for my newest box as I try to condense stuff down. This whole GW thing still make me crazy to no end. But there isn't much I can do besides what I have done. I rarely buy anything new from gw and usually if  I do it's from my one local store just so I can support him. If they sold other games I played I would never buy GW stuff.