This past week Hawk wargames announced their new 2 player starter set for DZC this kind of excites me because it is for the two factions I don't have and the overall contents and price look like a pretty good deal. 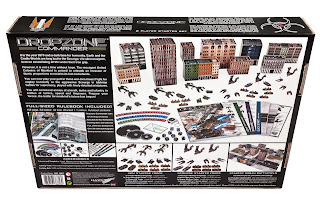 So here is what you get in the box.


As you can see models wise it isn't that many but this is enough to build 2 basic forces. Which is excellent compared to certain other starter sets. This also brings back a bit of nostalgia from back in the days when gw used to do the same. I mean yes today's starters are nicer than they used to be but they used to be literally a game you could actually play out of the box. Were today's starter box you don't actually have enough stuff to build a basic force without spending more money. Never mind the terrain, yes the old GW terrain wasn't that great but it was better than nothing.

Safe to say I am psyched for this and plan on buying one closer to the holidays. To me one of the greatest parts is price. £60.00 is perfectly reasonable for everything that comes in the box. Given it's only a little cheaper than a 40k starter box. But this is a much better deal in my opinion. Anyway enough of my ranting.