For those of you interested this is the book that helped me figure out my starting point for my prussians. From their I went crazy investigating through other resources to reach my final decision. I spent time over a 6 month period figuring it all out. And this is where it all began. 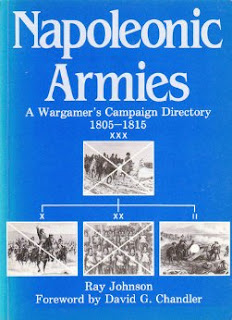 You can get it on amazon for about $30.
Now the book is broken up by country/kingdom. Of which it covers 27. Everything from France to Hesse Cassel. Which by the way I had never even heard of before reading this book. It starts at regiment levels and works it's way up depending on the country/kingdom.  Now to be fair if your interested in France this book is fantastic because there are 40+ pages just on them.
The book gives a bit of detail about each countries history around 1805 and then launches into organization.
For Prussia this starts with 1806 and tells you what the Prussian army consisted of and tells you what is going on at that time. It then launches into the organization of the infantry with a nice little chart for an infantry regiment.

It then goes on to tell you exactly how each company was formed. By this I mean the number of men and what they did. For example a Prussian 1806 musketeer company was 12 officers, 3 musicians, 10 rifles and 130 men. The book also explains the different cavalry break ups and artillery. Include the size of guns and who they were assigned to. It then also explains what a typical division looked like in 1806 along with a nice chart.This is then followed by a sections that do it for 1808-1812, 1812,1813,1814 and 1815. In total it is about 9 1/2 pages of text. All of the other 26 countries follow a similar format.


Well I hope this post is useful to some people at least and if you have any questions drop me a line or a comment.