Brickwars is a great little game that uses lego or lego alternatives. Now this system will be great if you got kids in the probably 6 or 7 + category. Mainly I say this because there are a lot of mechanics you can get into for the game. 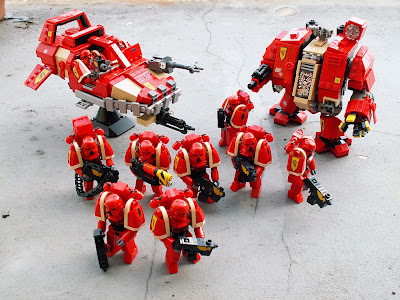 The main game is two phases. Move and attack. This is nice and easy. The rules for both arent too bad but with the variety of weapons available the attack and armor components can get crazy for kids younger than 6 or 7. My son can handle attack and movement with a lot of help but if you want the kids to do it more on their own they will need to be older. After that the game can get really complicated. With there being everything from bare hand to siege weapons available for minifigs to use/operate. There are also rules for all kinds of steeds, vehicles and machines that you can create yourself to use in the game. This part I believe is something that can be gradually introduced along with the different types of weapons. As for dice rolling there is the whole exploding mechanic that spartan games uses. Roll a 6 roll another die idea. What adds further complications is the minifig stats themselves can be generated. This is something I would also introduce latter, specifically there skill level. 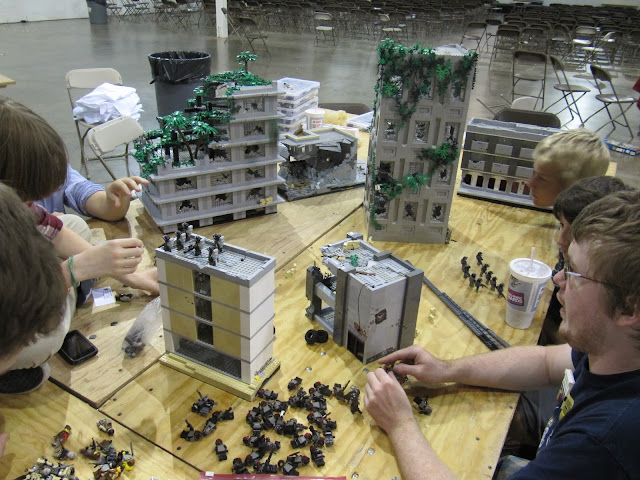 I'm going to stop here just because there is so much to write about it's crazy. The way I have started teaching my son this is simple.
We each use 1 minifig with the same stats. We move around, the only time dice are rolled is for attacking and defending with hands. Recently we have moved on to using blasters.

When he gets a bit older I will start introducing more rules. I will let you know how it goes when we do.

Now the greatest thing about this besides it being free is the fact that just about everyone has some sort of lego equivalent running around. My son and I first played this with some duplos because we had no lego minifigs. Now we play with his star wars ones. So check out the rules or drop me a line I would love to hear of your experience playing this with your kids. Oh and here's a link to brickwars.