Something from the past

About a year and a half ago GW closed their warhammer historicals part of the company. To me this was a blow because only about a year or so before I got into ancients. At the time Warhammer ancient battles 2.0 (WAB) was the standard for many people around her who played ancients. This post is mainly due to me being glued to the book the past few days while on the subway. Mainly because it has a lot of nice eye candy. 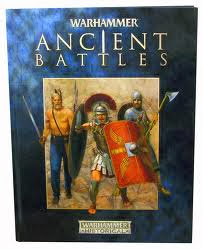 The main rule book was a hefty 215 full color pages. The basic book overall was great but it of course had its problems. It was full of pictures and illustrations and covered most aspects of the hobby. One of the great parts was that it included 13 different army lists. But it really shined with its 15 different supplements. That covered  tons of forces from the 3rd century BC to the 13th century AD and siege rules. That being said there is still quite active forums and groups online for this product. The book heavily focuses on movement which of course is highly important in a game were a majority of the combat is HtH. For me the most annoying thing about this rule set was removing individual models. It really slows down the game in my opinion. The other downside is the book is really written for 28mm models. It requires a decent amount of work on the players parts if you want to play in another scale. Now personally I will keep the book and use it for smaller games when possible because it is quite easy to pick up and play with new people, in my opinion. But when you get above about 1000 points it just becomes to cumbersome.

Now the biggest problem these days is just getting your hands on the stuff. You can find it on the net to download but you might not find all the faqs. This is something that only in certain circles annoyed people when GW killed it off with no real warning. To be far they also killed off a few other games at that time as well. But you didn't get the same outcry as when they killed specialist games. To be far I didn't even know this part of GW existed until I got interested in ancients here in Korea.

This isn't as much of a problem now that things like HC have started realizing there own supplements. When I first started playing HC here with other people I used the supplement books and rule book from WAB as a base point. However, this is a game I wish I had learned about sooner along with necromonda and mordienhim. In the future I will be doing a comparison between this and HC and if I have the chance the KOW variant for ancients.