Today's book is Fredrick the Great's Army, from the Men at arms series.
Now this book is not as useful  as the last one for Napoleonic’s for one main reason. None of the book focuses on that time period. However, this book does a lot to explain about why certain things are happening during the Napoleonic’s time period. 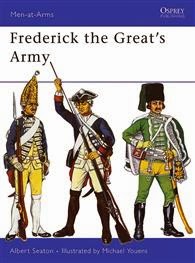 This book is very much for those that want the back story or are doing a force for around 1410-1763. The main focus of the book is on the 1712-1763 time period.  The book really explains how Prussia came to be and Fredrick’s early life.
Other important points covered in the book are the history behind Prussia’s and Austria’s relations, the first Silesian war, the second Silesian war, the changes made to the Prussian army and the Seven Years War. The changes to the army focus mainly on the Infantry and cavalry. But also includes topics such as the Hussars and artillery. There are a large number of color pictures covering the following: horse grenadiers, grenadiers, hussars, musketeers, bombardiers, freicorps, lancers, dragoons and officers from various parts of the forces.
So the bottom line, is this book good and why? I liked this book quite a lot. Mainly, because it shows the history of the military and one of Prussia’s key game changers. Even though it is not directly useful if you just want information on how to make your Napoleonic’s Prussian force, it is useful if you enjoy knowing and understanding why things are the way they are during the Napoleonic time period.
So check it out if you want to know the history or if you want to do a force during one of the other time periods. If you don’t want either of those avoid getting it.