Today will be the long overdue review of the Prussian Napoleonics infantry by Baccus. Now to start with here is a question for you. Below are a unit of line infantry, grenadiers and fusiliers. Can you tell which is which? 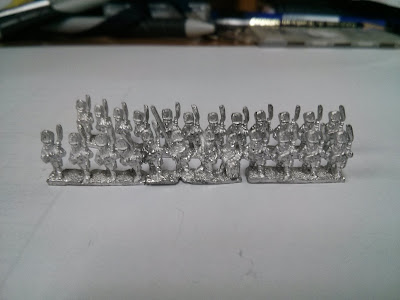 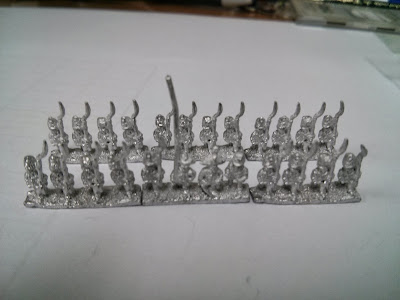 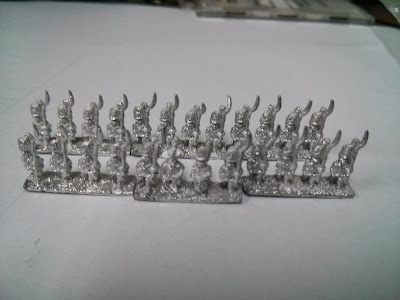 This is a common problem that you run into with the small scales that you don't with 28mm scale. And this problem also extends to calvary as you will see in the next post. This is my main complaint but in order to tell the difference you need to look very close. The first picture is line infantry, notice no real distinctive bayonet. The command strip also has a banner, a normal guy, a drummer and the leader has a sword resting on his shoulder. The hat style is also slightly different but probably hard to see in the pictures. Below is a picture of them painted all nice and pretty. 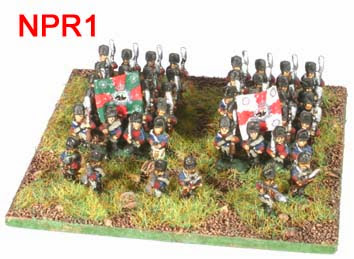 The second picture is the fusiliers. The main distinction between these guys and the line infantry is that they have obvious bayonets. But once again its mainly the little differences, such as the hats. Also on the command strip you will notice the leaders sword is pointed down and across his legs. The musician is also carrying a horn instead of a drum. However, they also have a banner in the same position on the stand and a normal guy. Once again nice picture below.

Finaly, the last picture of course was the grenadiers. Now here is where it gets tricky. For all intensive purposes (at least with the naked eye) they are the same as the fusiliers. Their is a little bit of different detail on their chests and their hats have a slightly different shape, but not much. The main difference is the command strip. Mainly in the fact that their is no banner. There is also 2 normal guys at either end and the musician is more towards the middle with a drum. The leader however looks the same. Here is the final very pretty picture.

Now it is time to talk turkey. Basicly all the infantry I know of come 4 men to a strip. The line infantry I have were included in the starter army I bought and give enough guys to make 10x 24 man infantry unit (6 strips each). That is enough to do  the men for 1 infantry regiment with a few left over so I will need to buy another pack of  12 units for 21.98.  Or two packs of 5 units for a total of  15.99 to finish off my project.
The grenadiers come in a pack of 4 units for 7.99 which was enough to finish off those parts of my infantry regiments. The fusiliers also come in a pack of 4 units for 7.99. I have 1 and will need 1 more to finish off my infantry regiments. For those that may be confused a Infantry regiment for the period I am aiming for was typically made up of (simplified FYI) 10 units of line, 4 units of fusiliers and 2 units of grenadiers. So I need a total of 20 units of line, 8 of fusiliers and 4 of grenadiers.

Hopefully this gives you an idea of what you will be getting into with infantry at this scale for Napoleonics. Just remember its the little things. This is why I plan on tagging my infantry in a rather specific way once they are all built. Anyway more to see in the future.
Aruki
Posted by aruki at 11:00 PM