How to paint my dindrenzi

As the tittle says this post will explain how I painted my dindrenzi fleet for FSA. 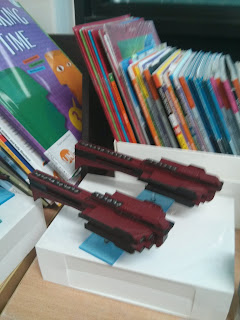 Just some useful info. When building the battleships  I have found it best to keep the inner gun deck separate. Mainly because it is a pain to paint if you put it in before hand. The paint scheme was the same for all sizes of ship. The base coating/priming/shading were done with an airbrush. Just so you know reverse shading is what I call it when I paint areas I want to be a lighter color instead of appearing darker.


For this example I painted the areas I didn't want to look like there was a shadow with the scarlett red and left the areas (often uneasy to reach with a paint brush) the heavy red. Examples on the above model of leaving it the way it is would be inside the gap between the engines. Reverse shading was done for instance on the tops of the models.