I am going to do a series of posts on my stuff from Baccus. Do take a look at the website. Baccus has models that cover everything from ancients all the way to Sci fi.  I am unsure how many posts but I will  be doing a review of all the models I received along with whatever else comes up. To begin with I will lay out the combined models in my two orders and then the next post will be about how they break down into the force I am going to make with them.


First off after a lot of research I decided on doing a Prussian 1812 force. I started off by ordering in the Napoleonic Prussian Army pack 1806-1815. This force is huge. It includes the following.

I followed this up with an order for 2 more artillery sets, a pack of grenadiers and a pack of fusiliers. 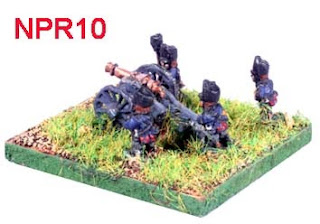 4 units of Grenadiers (24 men each with command)

4 units of Fusiliers (24 men each with command)

Between these two purchases it gives me more than I need to field a full 1812 Prussian Brigade. This was all done for around $65 + shipping. Baccus is also very open to adjusting the number of types of strips in their packs. By this I mean if you want more command and less troopers they can do that. I should also note that these do not come with bases. I purchased them separately because of the way I wish to base everything.

Now to be completely honest I did buy a set of banners out of curiosity but can't find them for the life of me. So I have omitted them until I due. I also did have a few problems with my initial order. I was missing some cannon wheels and command strips. But instead had extra trooper strips. Peter from Baccus was excellent (and very very patient) in helping me rectify this problem and was more than willing to send them out no charge. But since I had another order in the works I just had him put them together. And to quote him in an email to me about the help he had given me " As far as I am concerned you should get what you pay for and if you don't it's up to me to sort it out". This is a refreshing change from when I tried to get a failcast piece replaced and the message was fix it yourself.


Anyway more info and such on the models themselves and overall impression of the stuff.
As a side note images used from the Baccus website with permission.