Marines, Romans and plans for the next two weeks.

I primed the last of the Romans, and have assembled all but 4 of the Space Marines. I will assemble the last 4 over the weekend and probably prime them Sunday night. As you can see from the second picture I also assembled another broadside. I have two more crisis suits partially assembled as well and will figure out armaments and finish them up to be primed and based this coming up week. 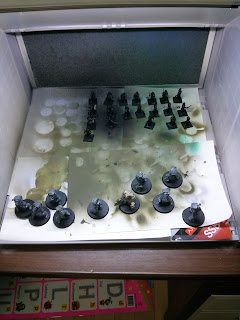 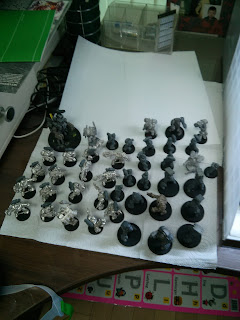 After that my focus will switch a bit. I need to ship all the models I have sold off on feebay Monday or Tuesday.
After that I have come up with a new list of goals for the next two weeks.
Which I will post about tomorrow.

In short there will be a lot less priming and such. I will be focused on making foam for holding the models and such as well as repairs on different models. I still need to also strip some titans and such for epic.

That is it for today.
Aruki
Posted by aruki at 9:00 AM