first update of the week.

All of the tau models seen last week and a few that were not have now been primed. I hope to base coat them all tonight as long as I don't run out of paint. All that is left for assembly is some crisis suits and kroot. Not sure if I will assemble the kroot now or hold of but I will do a chunk of the suits. Probably 4 or 5 for now. 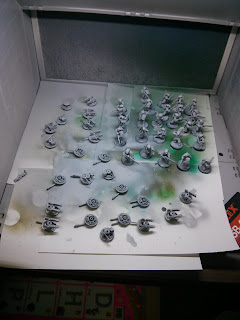 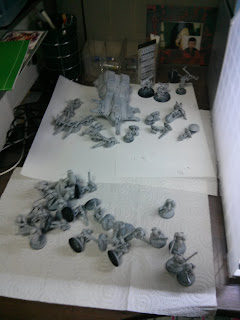 Next up will be the Romans since they are already assembled and just need to be base coated.  After that I will probably run a lot of epic through base coating. Since I have so many assembled. Still need to strip a few titans and such though but should be able to do that nice and fast. So goals for this next week are moving along nicely. Think I may move on to priming the DZC stuff after the epic stuff. As I need to figure out a good way to prepare all the Prussian models for priming.


In short, I am on target for completing my goals before I move. Till Wednesday .