Today I want to discuss how I am organizing my brigade. The 1812 Prussian Brigade follows the below chart. A lot of the information for this I was able to attain thanks to the help of some great guys on the Warlord Games forum and a book they recommend along with a few websites. I will talk about the book at another time in its own review. 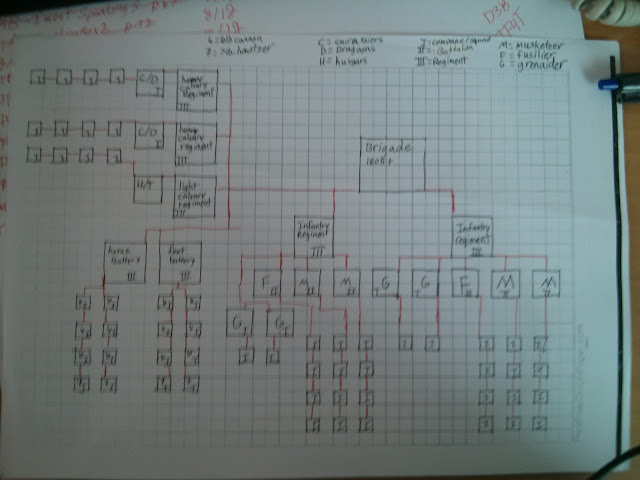 I know I need to actually do it up on the computer at some point to make it easier to read, I will do that in the near future but for now I will break it down for you below.

The Heavy Cavalry regiments are both 4 Companies large and can be either Dragoons or Kurassiers  In game terms they are 9 man units including command.

The Foot Battery and Horse Battery were identical in terms of cannons. But obviously the Horse Battery was more mobile. Each Battery consists of 8 cannons in game. In theory they should be 6 6lb cannons and 2 7lbs howitzers.


Now as you will notice from this list I am short on a few things. First I need a few more cannons (4), then I also need another 4 companies of fusiliers and 6 more companies of musketeers. I will remedy this in the future after I have already got the army going. On the other hand I also have a ton of extra cavalry but at the same time I am missing cavalry I need. I am short on Kurassiers/ Dragoons but have a ton of extra lancers and reserve cavalry.  I will remedy this as well in the future and maybe trade off the extra stuff. I am not sure yet as I have yet to see if they will be of use in Black Powder.

On that note I would like to point out something important. I am not building this purely to game with. I am building this because I have always wanted to build an accurate Napoleonic time period army (actually I want two). The fact that I can play games with them just makes it better.

That all for now. Will start looking at the actual models in the next post.