So the big idea was to have all those models based from last Fridays post. Unfortunately  the airbrush would not cooperate last night  so I only got a small amount of them done. I also seemed to have decent success on Feebay though I hadn't realized the shipping fees had increased as much as they had and I screwed up shipping on two key ones. Which means I had to eat the cost which has seriously screwed my profit margin but more on that later once all the fees and such are worked out. So below you will see all the termies primed and a few assault but the rest is the same. Hopefully, the massive clean and such I did to my airbrush works and I can finish this all up for Wednesday. 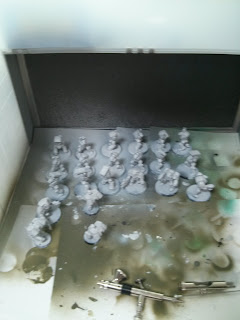 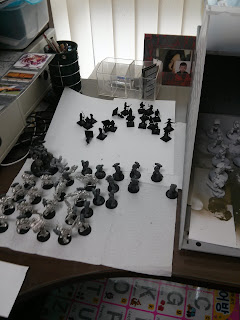